It’s not a simple question. As you will see, the pay is somewhere between 1300€ and 7000€. How much they pay you in the French Foreign Legion depends on many factors such as rank, family situation, qualifications etc. The salary is higher while you are on operation in abroad.

Some details about the pay in the French Foreign Legion

Before you pass to the tables, let me to explain you some details. Many people think that a Legionnaire makes as much money as a member of the famous Blackwater mercenary organization. Wrong.

A Legionnaire doesn’t make more money as a normal soldier in the regular French Army. The rules are the same for us, nothing more and nothing less.

A program called “SourceSolde” calculates the salary for everyone according to his actual military and family situation.

It covers everything, which concern the person in the army, like:

It means if a person

I wanted to stay simple, but in the same time I want to let you estimate the best possible the salary of a French soldier. For this, I took a single man, living in the barrack for each rank.

Salary of single man living in the barrack

The salaries during a deployment, still for a single man.

Pay of a single parachutist

Salary of a single parachutist during a deployment 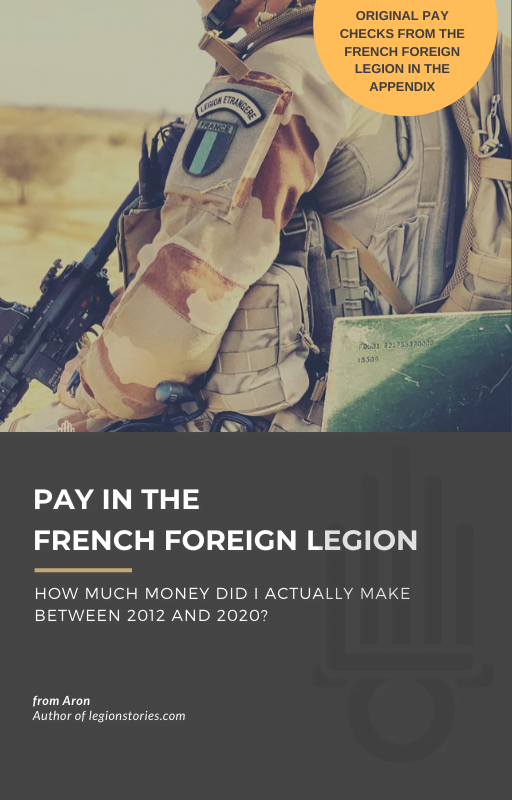 I’m not only sharing my original paychecks in this E-book, but I’m also talking about how my career and personal life evolved during my years in the French Foreign Legion. The e-book makes 36 pages with more than 10 pages of stories and explanations.

Probably the most important factor your salary depends on. This bonus exists since January 2022 and supposed to be more advantageous than the old field service premium.

How can you get it?

You only have to be unable to go back to your room/home between 23pm and 5am. So, even if you are on a training in your regiment during these hours, you’ll be paid more. Here are the amounts :

Exercice around your regiment

Exercice away from your regiment

NOTE: The paratroopers can get this new bonus since January 2022, but there’s probably going to be a change on the paratrooper premium in 2023.

More about this bonous (ISAO)

A new bonus has been introduced since April 2019 for qualified soldiers of mountain troops, which concerns the 2°REG in the French Foreign Legion. (This premium cannot be combined with the paratrooper’s bonus).

You need to take into account that I only have taken the salary for those who are living in the regiment. So, for a caporal of the French Foreign legion means that he doesn’t have to pay anything but his food for Friday night and the weekend, because he has a lunch and dinner each day and the rooms are for free in the regiment.

During a year in a combat unit you pass at least 4 months on field service, 2 months on Vigipirate (the “counter-terrorist” mission in France), 4 months on a training or in the regiment and 2 months on holiday. So each time you are on mission somewhere else, you make more money.

Yes, you aren’t gonna be the next Bill Gates if you are serving as a simple soldier in any army of the world, that’s for sure. You are working occupied way more, than normal people and probably make less money.
BUT, France isn’t a 3rd world country and people are living a normal life from a soldier’s salary.
When I was a legionnaire, I could spare over 30% of my pay and lived a very easy life. I travelled in Europe, ate in restaurants, bought the latest phone etc…

If you like Legionstories, you can support my job via this link !

Thank you for reading! If you have any further question about the salary, please leave a comment below. If you didn’t read my stories on the blog, here is the first chapter

What is the French Foreign Legion?

How to join the French Foreign Legion in 8 steps

1. Chapter – I decided to join the French Foreign Legion

Life after the French Foreign Legion

What are the sport requirements to join the French Foreign Legion?

Any cookies that may not be particularly necessary for the website to function and is used specifically to collect user personal data via analytics, ads, other embedded contents are termed as non-necessary cookies. It is mandatory to procure user consent prior to running these cookies on your website.